Last weekend my friend V. and I went to a costume exhibition at the Gemeentemuseum in The Hague called 'Mr Darcy meets Eline Vere', a big exhibition about Romantic Fashions in the 19th century. We loved the exhibition: there is an amazing amount of beautiful costumes on display, the museum gives a lot of background information and there are some modern designs to look at. If you are into fashion and costume, you should definitely go and see it. It ends 22 March, 2015 so hurry. 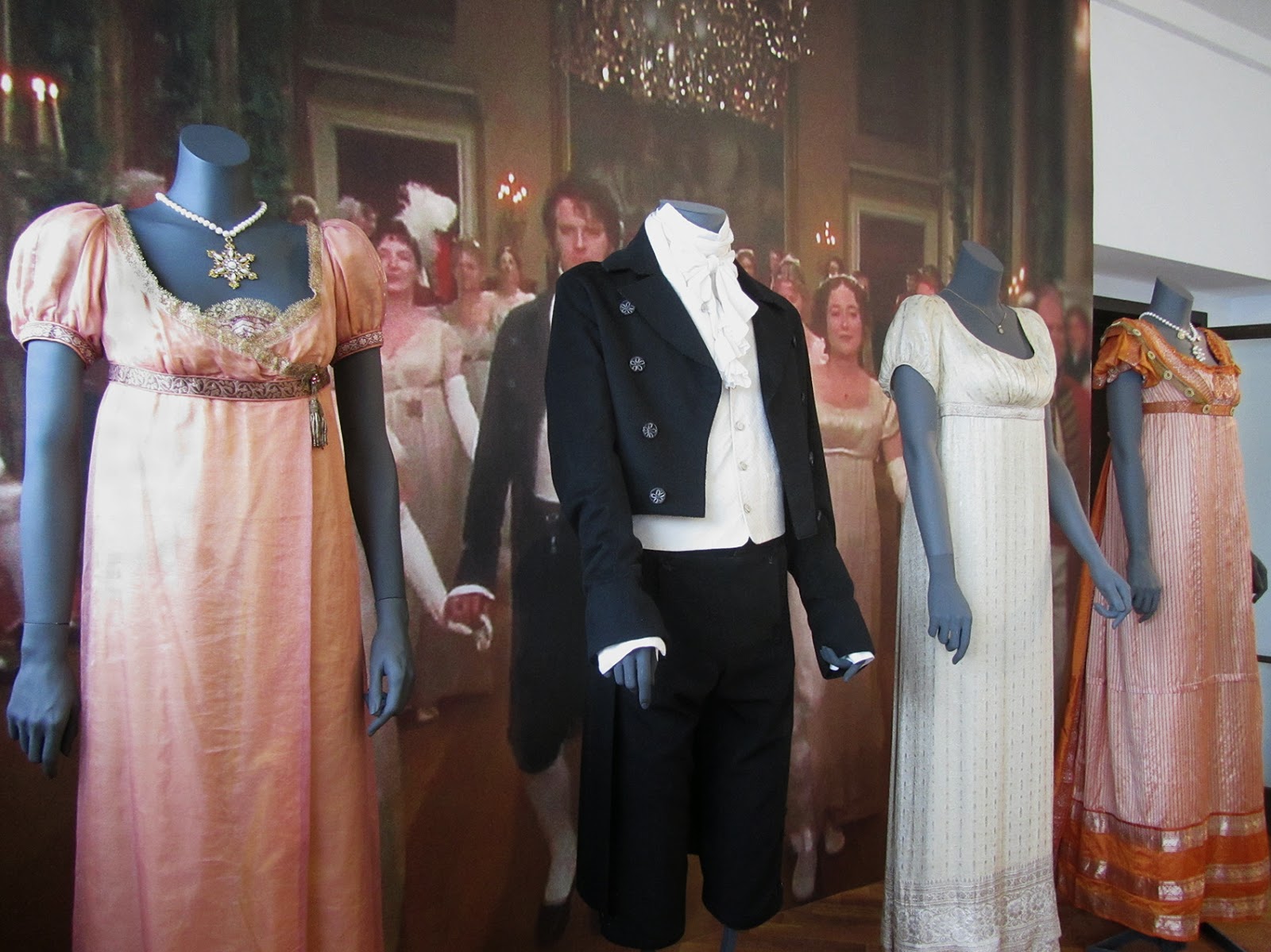 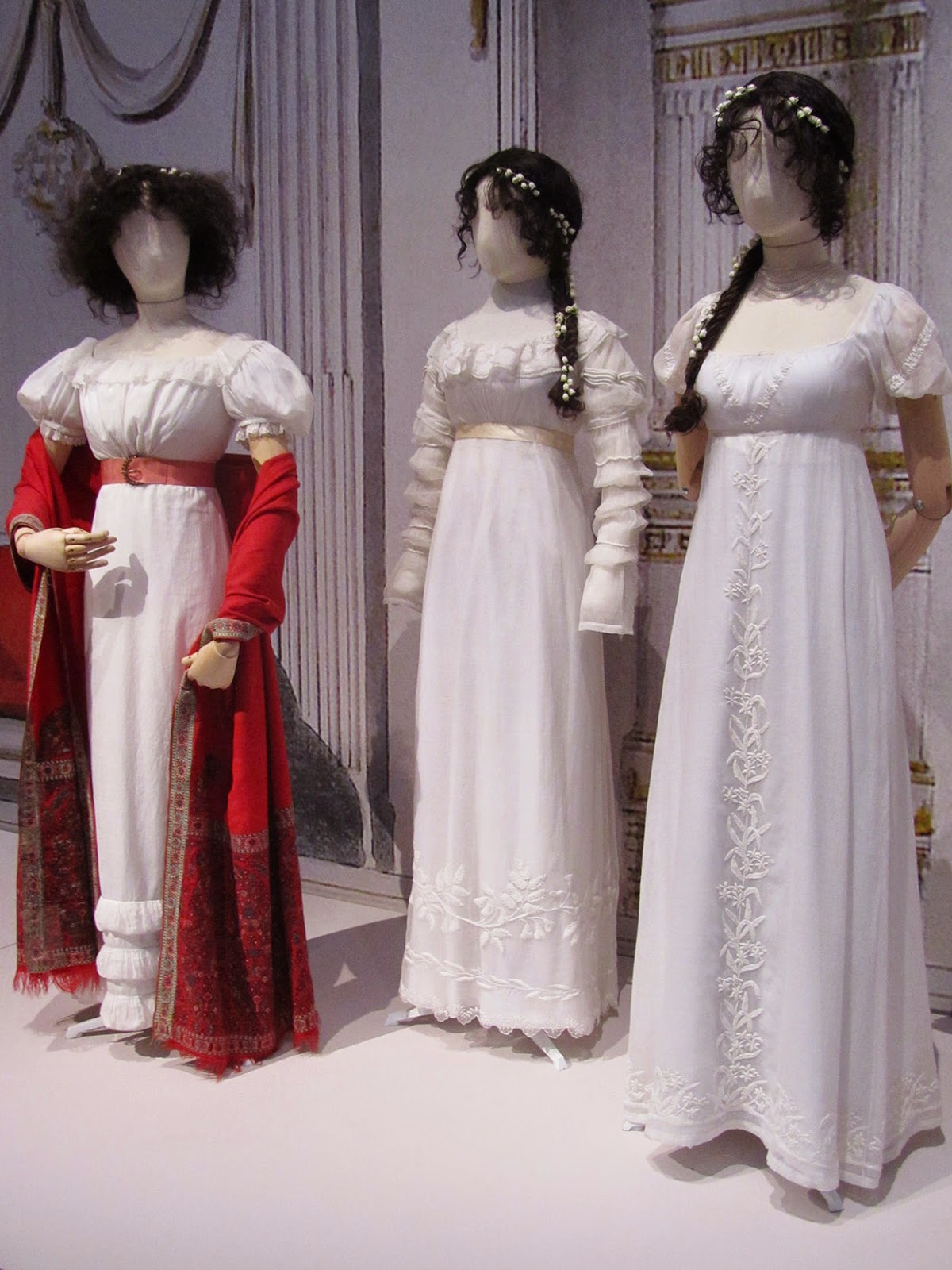 Cotton dresses: left ca. 1805, middle ca. 1816-20 and right ca. 1810-20. In the era after the French Revolution women's dress was simple and unadorned. The vogue was inspired by the world of classical antiquity, seen as the birthplace of democracy. Cotton fabrics were as fashionable as silk. Exquisite Empire-style dresses were embroidered white on white, reflecting the belief that the sculptures of the classical world had always been white. They were complimented by large cashmere shawls. Most of the dresses of this type shown in the museum were originally owned by Dutch families.
Thanks to steam trains and steam navigation, people became increasingly mobile. As the century wore on, social life moved increasingly outside the home even for women. There were more and more public places in which it was thought acceptable for them to move about freely and take part in the life of society. 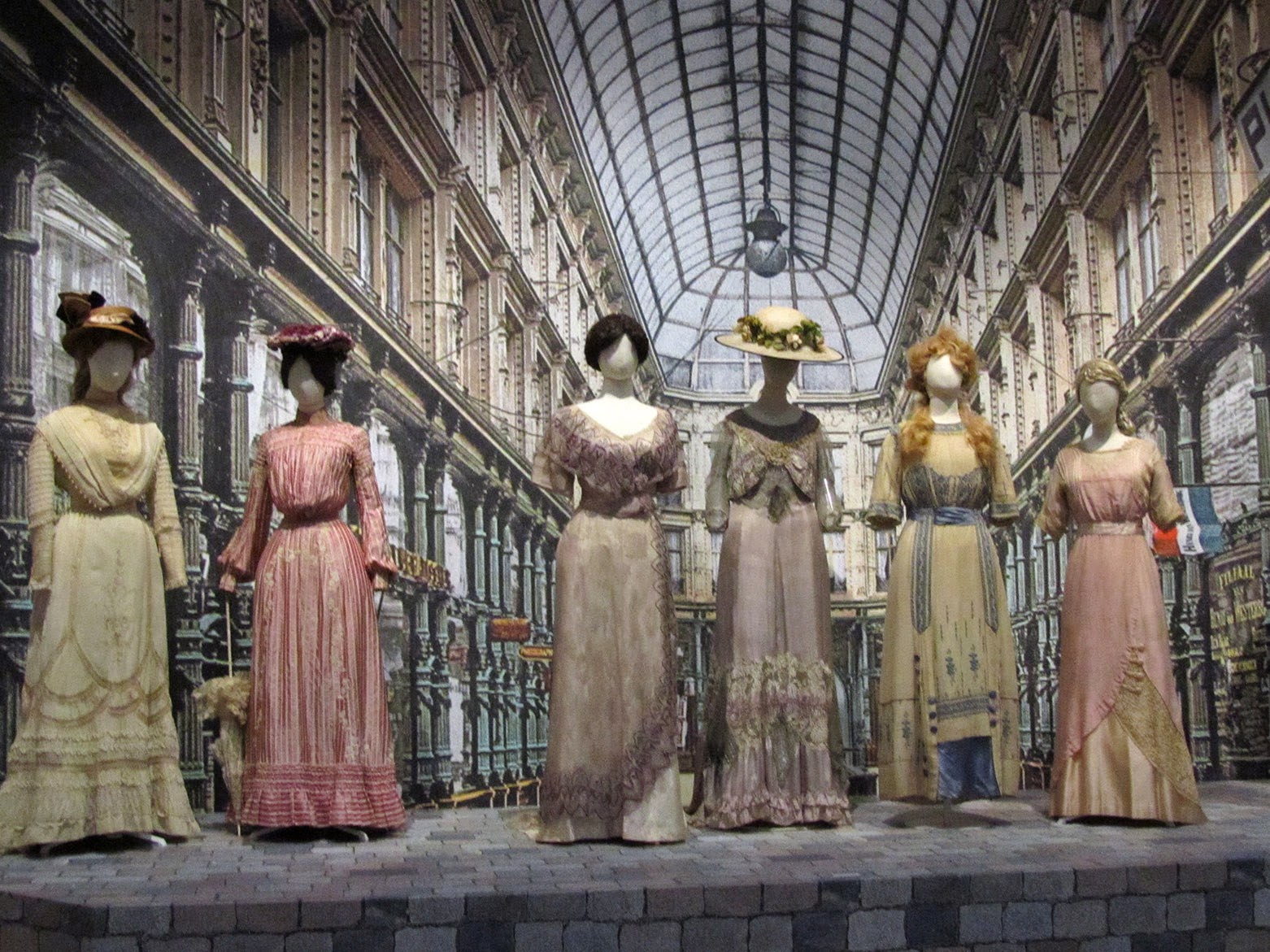 Such places included shopping arcades, clothing shops, museums and libraries. Women could take part in sporting activities too, often even in mixed company. The 19th century was also the time of the great fashions shops and department stores. Customers could visit shopping arcades full of luxury goods, 'bazaars' and department stores operating on the basis of set prices and special offers. For the first time articles could be exchanged or returned. Women in the Netherlands could order clothing from Paris. They just had to take their measurements according to the instructions in the catalogue and place their orders. 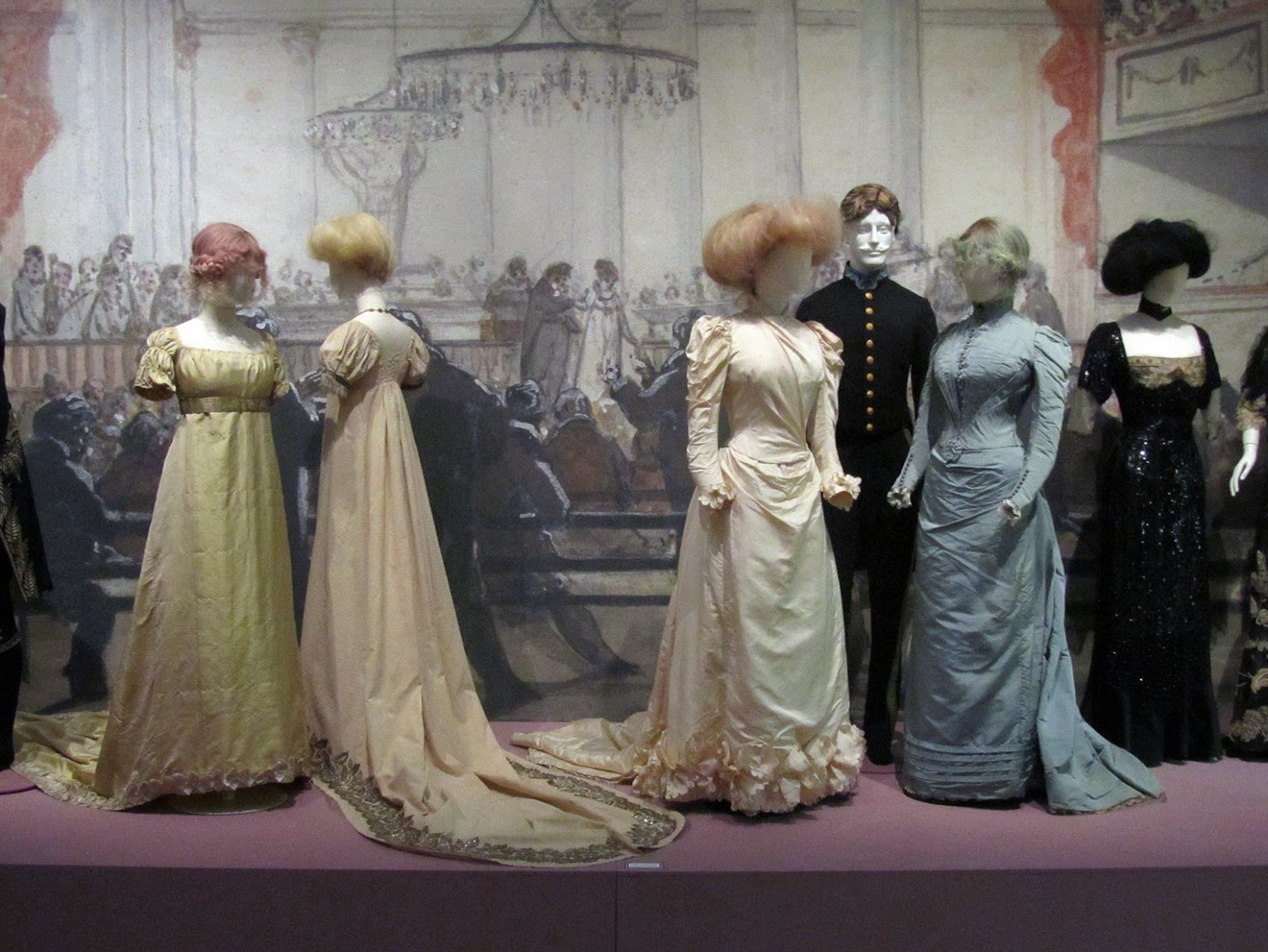 Pictured above: on the left are two evening dresses ca. 1810 in cotton and silk. On the right: bridal gown and bridesmaid's dress of sister of the bride, cotton and silk, Sint Petersburg 1891. 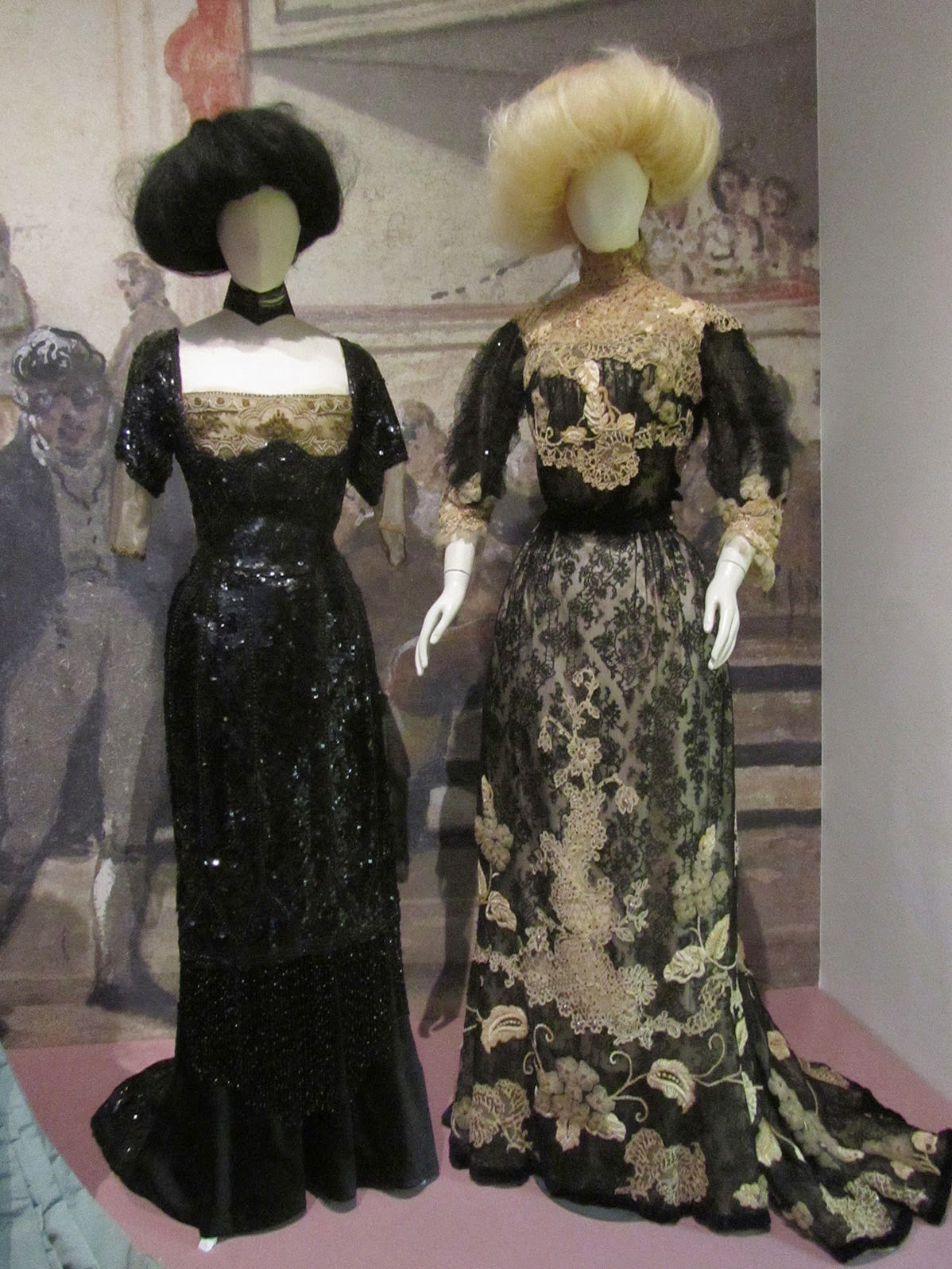 Pictured above: on the left an evening dress ca. 1909-10 made from celluloid, glass, imitation jet and gold threat. On the right: Au Camélia (label), dress from Amsterdam ca. 1900 made from silk and cotton.
The amount of historical dresses was astounding and they were mixed with costumes worn in films or TV series such as Pride and Prejudice and Downton Abbey.
Also, a number of modern dresses were displayed made by modern fashion designers inspired by the days of Mr Darcy and Eline Vere. 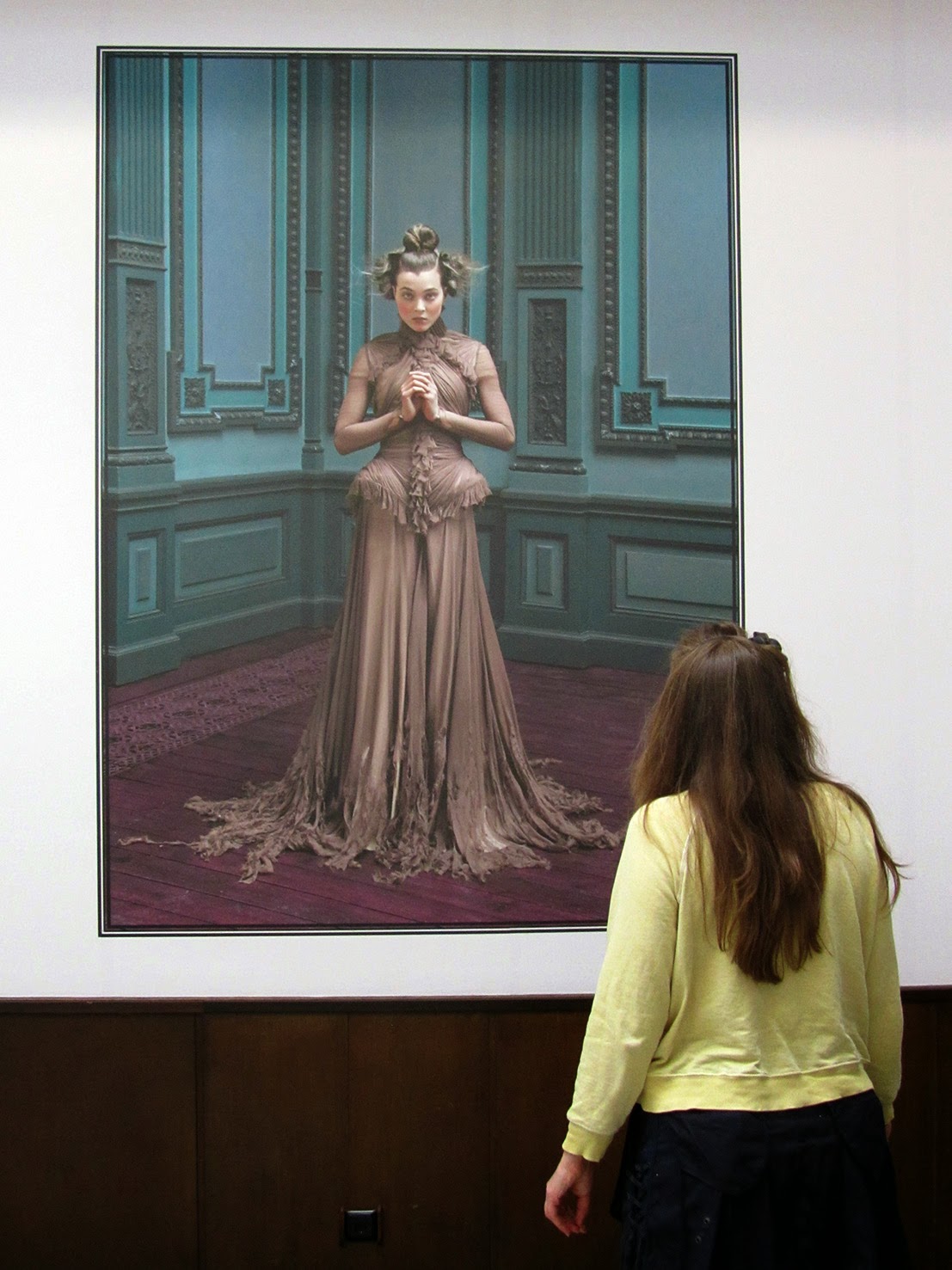 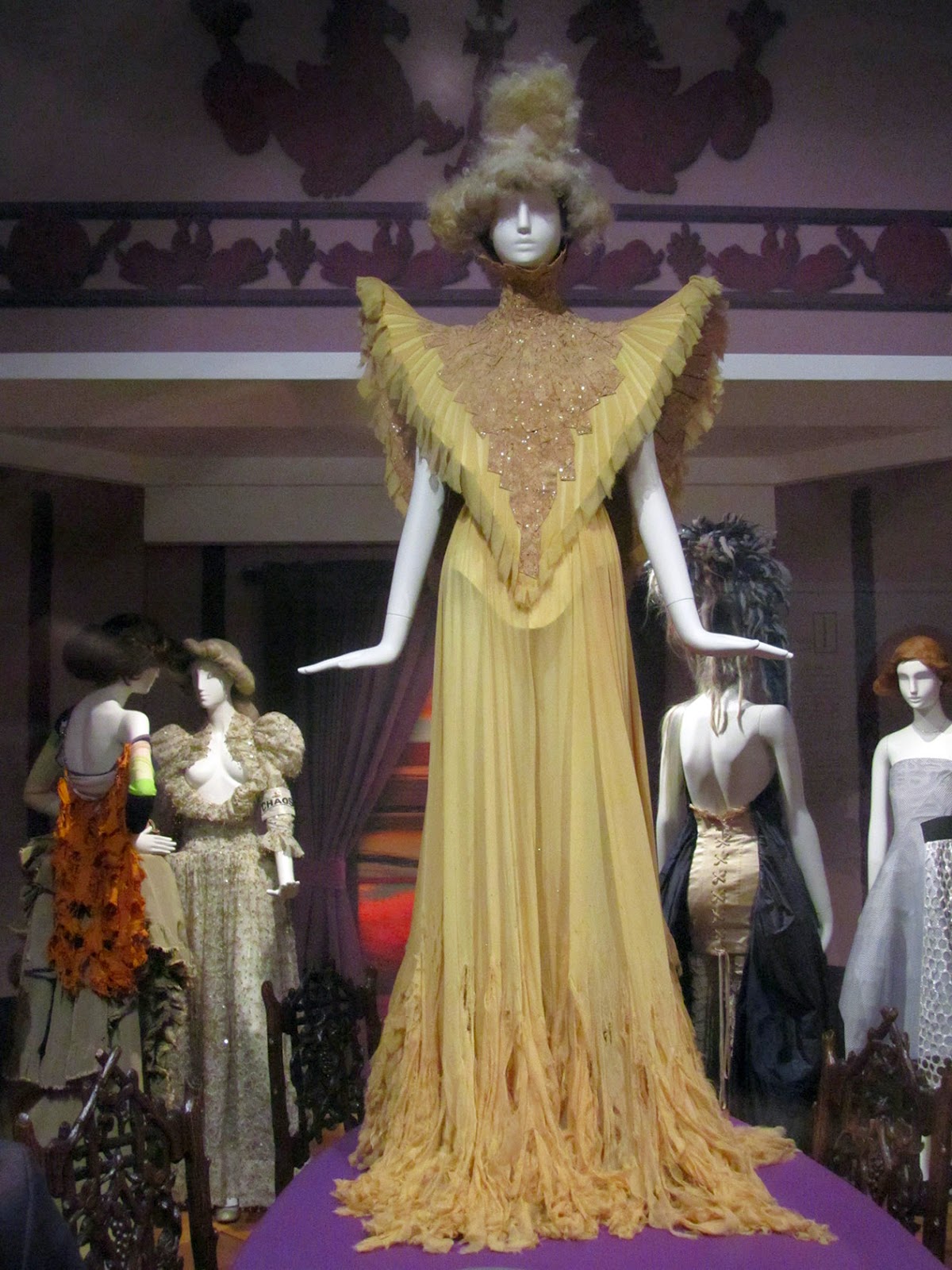 Yellow evening dress by Jan Taminiau, collection 'Nature Extends' autumn/winter 2011.
We as costume-freaks loved it, there was so much to see and we even learned a thing or two.